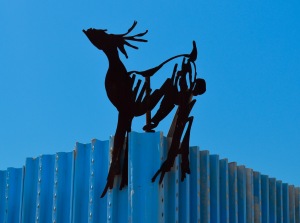 It pained me to have the still under construction Niners’ stadium pointed out to me in the distance in Santa Clara a few days ago as I made the turn around the horn from Alviso up to the peninsula.  The scab from their pending departure from San Francisco still has not healed and having it ripped off so forcefully without any sense of decorum seemed insensitive.  The last time that feeling came over me was when a fraternity brother said something to the tune of “Hey, isn’t that your girlfriend holding that guy’s hand over their by the bar?”  A better reaction would have been to nudge me in the opposite direction and say “Let’s go to McArthy’s and shoot some pool.”  Gazing in the direction of the new stadium, I feigned interest, forced a smile and tried to make myself believe that the Niners are the Bay Area’s team, whether in Santa Clara or San Francisco.  The sad truth is that Santa Clara gave the Niners what San Francisco could not – the stadium they need, deserve and have waited all too long for.  I will get used to it, the pain will fade and I will learn to love again.

Today I was again reminded of the fact that for just one more season the San Francisco Forty-Niners will actually play football in San Francisco.  The Stick loomed mightily over the parking lot, its worn and soiled concrete clashing with meager attempts to spruce her up with bright green, red and blue paint alongside the escalators; the proverbial lipstick on the pig.  I understand the necessity to put her down and replace her with the state of the art venue that will allow our Niners to host the Superbowl in 2016 but seeing her loom defiantly in the distance, holding court over the landscape, touched a cord with me.  No more Muni rides from California and Van Ness and no more breezy foggy evenings, bundled in sweatshirts and long johns under my 501s.  God forbid, I might actually have to wear shorts and a t-shirt to a Niners’ game.  The one saving grace is that it will be called Levi Stadium.

However as I followed the Bay Trail along the shores of Candlestick Point and back around toward the old shipyards it dawned on me that this land is going to make a remarkable transformation over the course of the next decade and the Bay Trail will bear witness to it all: 12,000 new affordable homes, 3.5 million square feet of retail, office, and research and development space, plus 300 acres of parks along Candlestick and Hunter’s Point; all to the tune of $1.7 billion (SF Chronicle)! While the planned trail around Hunter’s Point is currently not accessible it will one day follow the shoreline clear around Candlestick Point Recreation Area and on to the old Hunter’s Point Shipyard before connecting with the existing trail at India Basin.  With this section inaccessible to me today, I walked north through the Hunter’s Point neighborhood and climbed the hill separating the two areas before descending back down the north side to India Basin and Heron’s Head Park.  Just east of India Basin Shoreline Park is the Open Space Preserve of the same name.  Between the two is a misplaced SOMA style loft building, some heavy industry businesses, a liquor store with a few nice guys holding court on the sidewalk outside, and an art studio hidden behind a corrugated steel wall.  The walk out to the tip of Heron’s Head is worth the extra effort if you are looking for some quiet solitude with an eclectic choice of views, depending on what you’re in the mood for – industrial, city skyline, bay bridge, east bay hills, or south bay.  Take your pick, then sit back and let the breeze tickle your senses.