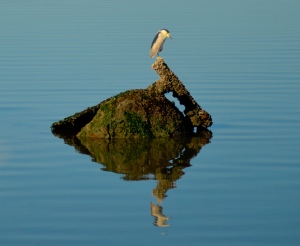 I am going to miss Oakland as I leave her behind and enter what is unchartered territory for me, the southeast bay region between Oakland and Milpitas.  I am a city guy by nature.  I love the buzz, the energy, the edge and unique characters that come with millions of people sharing small amounts of real estate.  While on the bus, BART or ferry, I would rather talk to perfect strangers who are as opposite from me as possible than someone from my same background.  And I prefer to wander in strange or unusual places that are out of my comfort zone over my own neighborhood.  As I venture south, the buzz of nature will replace the urban energy and human conversation will be replaced with whatever critters happen to engage me.  As I left Alameda and Oakland behind this morning, I realized I didn’t get to visit some of the restaurants, distilleries or wineries I had hoped to.  However, there is solace in knowing that all this will still only be a Clipper card ride away when I wrap up my walkabout on June 29th.

On my approach down Tidewater Avenue toward at the Boating Center, rowers were gearing up for their morning workout and a few skulls glided gracefully by, sending shallow wakes across the glassy waters of the channel between Alameda and Oakland.  A black crowned heron greeted me at the end of the dock at Tidewater but he was camera shy and I caught only his tail feathers as he took off east past Hansen Marine Aggregate.  A distant relative of his was much more cooperative a few hundred yards down shore – or perhaps it was him again, preferring a more photogenic backdrop to his photo-op.  American avocets, cormorants, great blue herons and egrets also joined the backdrop of the Martin Luther King Jr. shoreline as I ventured south toward my destination, Marina Park in San Leandro.

This morning, I was in good company with Jim Townsend and Hing Wong.   Jim is the Trails and Development Manager of East Bay Regional Park District and Hing is a Senior Regional Planner with the Association of Bay Area Governments who had once worked on the Bay Trail project.  It didn’t take long for the city to dissipate behind us as we progressed south and into the Martin Luther King Regional Shoreline.  Even with the urban center of Oakland seemingly just yards away we barely noticed the freeway, the coliseum, and arena as we stopped to take in Arrowhead Marsh.  However urbanity was unmistakably there as we proceeded through about a mile and a half of city street paths toward the Oyster Bay Regional Shoreline across the water from Oakland International Airport, a perfect spot to bird-watch – as in Southwest Airlines birds.

I was in for a treat when I arrived at Marina Park in San Leandro.  Bay Trail extraordinaire, Corinne Debra, was waiting to congratulate me at my official halfway point.  She gave me a heads up the day before so I knew we would be meeting, but when I saw she had taken the time to create a commemorative halfway sign for me I knew this woman was a rock-star.  Corinne has traveled every mile of the Bay Trail and then some over the past couple of years and blogs on everything from other Bay Trails to anything that has to do with Chocolate, her true passion.  Corinne and I learned that we had at least one thing in common other than this obsession with long distance trail-blazing – our fathers, a few years apart in age, had both completed the Davis Double Century bike ride in the grueling Sacramento heat, not once, but multiple times.  So I guess that’s where we got the bug – we can blame our fathers!